You know what a progressive dinner is, don’t you? Just in case one of my readers is not familiar with the term, a progressive dinner is a dinner party with successive courses of the meal served at different people’s houses. This blog post is part of a “progressive blog post”, I will tell you more shortly, but first I have to start at the beginning, well, sort of.

The “Monday Window” challenge was inspired by “Thursday Doors”, a fun activity conducted by Norman Frampton. Norm visited Atlanta last week and we got together for a photo walk around Midtown Atlanta and for dinner. See I did get back to food. We were looking for windows and doors, of course, and “O4”, “other objects of opportunity”. So this is my “Monday Window” installment. It will be followed by my “Thursday Doors” post, and a couple of other articles rounding out the “Midtown Atlanta” quartet.

For my friends far from the Atlanta scene, “Midtown” is nowhere near the middle of the city. Atlanta is not a very old place at all, as is neatly illustrated by its seal. The seal, here a photo of the emblem on a street light pole, has two dates on it, 1847 when Atlanta was started, and 1865 when it was rebuilt after having been burned to the ground in the Civil War.

The area that is “Midtown” wasn’t even part of the city in its first half century of existence. Even this designation is much newer than that. It is a large business and cultural district half-way between downtown Atlanta, the original city, and Buckhead, which is an even newer business area. Midtown has some historic buildings and churches and a large number of very new and modern buildings. You can see this mix of old old and new in my photo here showing the side of the Fox Theater (1929) in the foreground and the Georgian Terrace Hotel (1911) in the right background with its most recent, and modern addition (1991, with more recent renovations completed in 2006).

And wow, here we are with lots of windows! So let’s have some more. 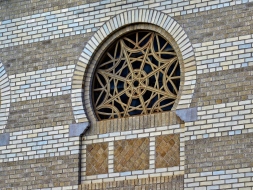 There is much more to this story, as I already explained. You will see the rest in other posts. As they are released I will add links here so you can do a “progressive read”. Oh, don’t fret, we will get back to the dinner in time!

A Little Bit of Street Photography 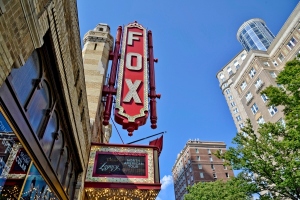 A Photo Walk in Midtown Atlanta

My site is all about my travels around the world and in Australia, plus daily life photos!

Various Things On My Mind

MostlyMonochrome
highlighting the good and the beautiful around us

many thanks for your visit!

one day at a time