Last week my Thursday Doors post was a simple photo without any descriptive text. I was in a hurry and just used a photo from my archive and went on. It didn’t take long before two blogger friends, Norm and Vicky,  inquired about the location of my fancy doors. I quickly answered that I thought the photo was taken in Savannah and that I would check and report.

This is my report and it is a combined Monday Window and Thursday Doors post. Please read on to learn more.

Checking Up – How I organize my Photos

For many years I have used Microsoft Photo Gallery to import photos from cameras to my computer. It has some very useful options. I have it set to create a folder for photos by date taken, close to the default. This gives me a folder for every day on which I have taken photos. Every so often I move these folders to my photo archive folder which has folders by year and sub-folders for each quarter. In addition Photo Gallery uses the standard tagging method for assigning descriptive tags. My tagging is not as thorough as it should be, but I often go back and add, or correct, tags to make my tag cloud more complete. [If you must know why I like Photo Gallery so much you might get an idea from this link.]

It is thus quite straight-forward to look at the tags on my photos to learn location and other details. It is also easy to look at the date taken and go to my archive and locate the folder for that day’s photos. Yep, the photo is tagged “Savannah”. Having just told you how smart I am, that should have been enough. It wasn’t for me, and I am about to show you that I am not all that smart.

So it seems that we took a short walk in the late morning. Here are those nine photos from the archive:

Finding the location with Google Maps

That “fancy doors” photo is highlighted. I just could remember that short interlude, or where exactly we went. I looked at the photos in the group and noticed the inscription over the door portal in the sixth photo, the one taken at 10:36. Since that was just two minutes after the photo in question it had to be nearby. Easy! Just let Google find the place with that name and within seconds I can pinpoint the exact location!

Bring up Google Maps, go to the search box, enter “Hodgson Hall Savannah” and presto, we get the exact address and a view of the surrounding area. Even the picture on the Google page (big red arrow) looks like my photo. All I have to do is look around the immediate area using “Street View” – we couldn’t have walked far in just two minutes – and I can locate the “fancy doors”. The two photos taken immediately prior to “Hodgson Hall” photo even show up in the search image – the yellow arrows.

I searched and searched. Street View showed some marvelous doors, windows, ironwork, architecture, trees, patterns, textures. Savannah is truly a mecca for photographers! Why did I take so few? And why, oh why, can’t I find the one taken within a minute of the ones already located??? I spend the better part of the afternoon searching, admiring, pondering. I was about to give up when I decided, maybe if I looked for the photos taken after the “Hall” photo I might get a clue.

Sure enough, I got a clue. Like a bat to the side of the head. The next photo, First in the third row above, also had an inscription, “TELFAIR HOSPITAL”, it was taken just two minutes after the “Hodgson Hall” photo. The search didn’t go as quick as the last, but after a short while I located the building. It was on the other end of Forsyth Park. I have been there many times, it is a big park. That’s half way around, about half a mile. No way could we have walked that in two minutes! ☼☼☼ The lights came on! ☼☼☼ We took the trolley sightseeing tour that morning! I was shooting from the bus! That’s why there are so few pictures!

Looking around a wider area, and along Bull Street, the normal sightseeing tour route, I soon located the rest of the locations. Here they are:

The fancy doors photo is number 2 (blue dot). The hardest one to find was number 1. The image shows four bay windows, some neat lattice on the patio and an ironwork fence. The photo also shows a lot of tree branches and in Google Street View those trees obscure the building. I found it using Bing which had a clearer view of the building.  So here are the photo locations, and here are the photos from that memorable day. There is a bit more to this story, read on after you have looked over the pictures. 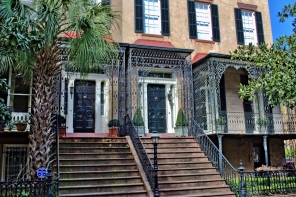 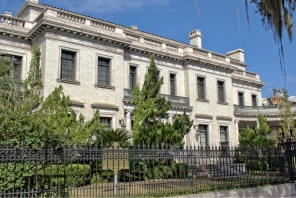 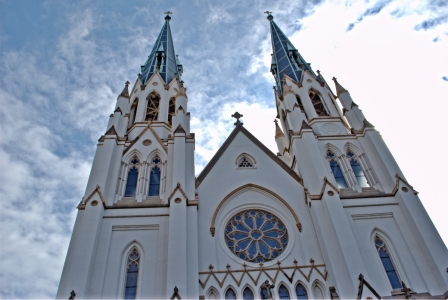 It was this visit to Savannah with my friend Tom that inspired this blog. Yes, if you go back to the earliest posts you will find other photos, taken both by me and Tom, from this trip.

Thursday Doors is a weekly feature allowing door lovers to come together to admire and share their favorite door photos from around the world.

This delightful activity is conducted by Norman Frampton. Come join in!

Our Arts Magazine, Where Artists Write

lil bit of everything

shout it from the rooftops

This blog is my creative outlet where I can share my photos and a bit of myself.

the only deadhead in the hameau

From the depths of the French countryside, the miscellaneous musings of an old tie-dye wannabe